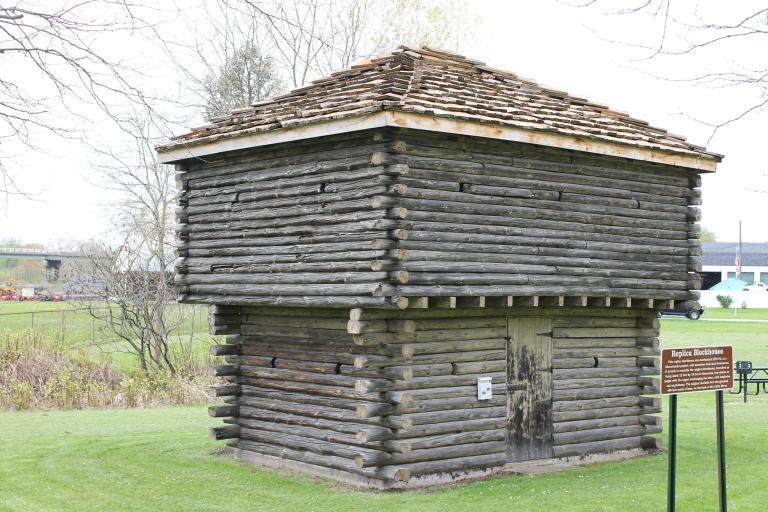 300th Anniversary of the Clyde Blockhouse

There are very few 300th anniversaries of anything, especially in our area, but we are blessed with the Clyde Blockhouse (1722-2022). And, we of course have the replica blockhouse built during the Bicentennial celebrations of 1775-76. The Blockhouse is Wayne County’s only Revolutionary War site, and operated variously as a fort, trading post, supply depot and settlement between 1722 and 1788. During some of this time, there was at least one Iroquois settlement here, named Sodoms.

We will have Perry Ground (Iroquois storyteller) at 11AM on Saturday 9/10, and the Towpath Fife & Drum Corps on Sunday 9/11 at 11AM. Both performances will last about an hour. Revolutionary War reenactors from at least the following units will be represented:   64th Regiment (British), Butler’s Rangers (British), Brant’s Volunteers (British), the British Indian Department (Fort Niagara), Royal Artillery (British), New York Continental Regt. (American), Hoisington’s Rangers (American) and possibly others.  There will be an Encampment, plus Regimental Tavern, Sutler, and Surgeon. Blacksmithing and carpentry demonstrations / displays are also planned for one or both days.

As a special bonus, we will have a full-size cannon both days, with firing demonstrations by the Royal Artillery.

A couple of food trucks are expected to be there as well.

There will be Blockhouse tours and short history talks.